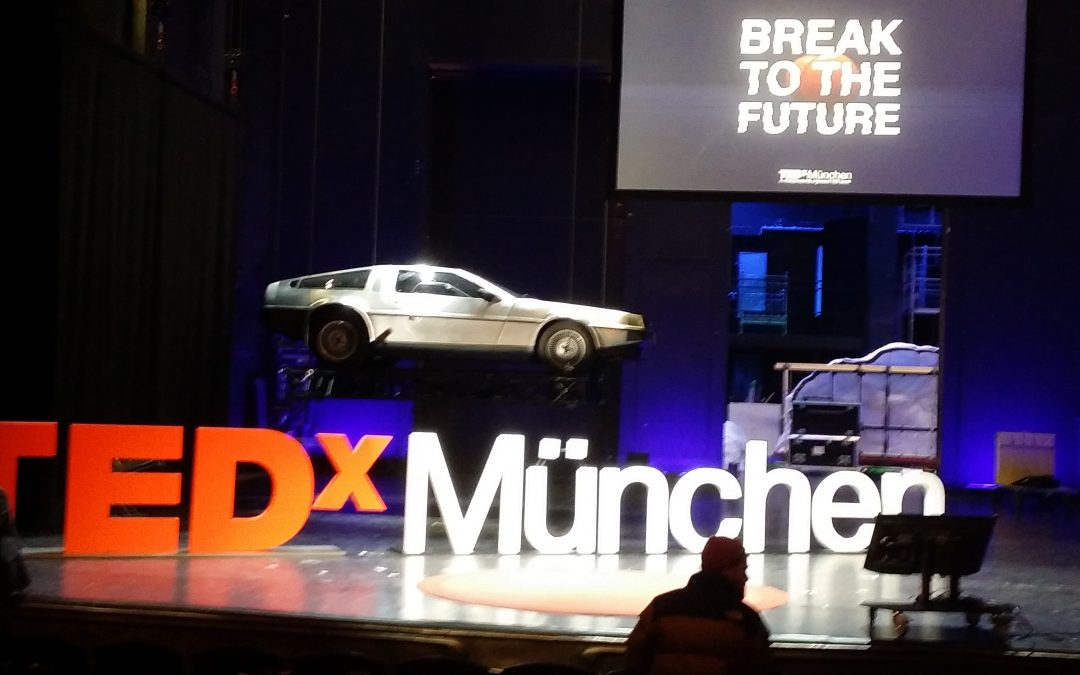 What do you think of on a DeLorean DMC-12? Exactly! The legendary car from the movie ‘Back to the Future’. Exhibited live on stage in Munich, it opened the motto for the almost 20 lectures of the Autumn Tedx Talk. “Back to the Future” stood for: “old” ideas that could lead us into a better future. In the end, we were filled with inspiration and ignited by exciting future projects. Here are three of them: The 18-year-old student Zaid Zaim had fled Syria and was so sad that the world monuments of his homeland in Palmyra had been destroyed by the IS that he devised a unique future project. With the help of Augmented and Mixed Reality, he reconstructs the cultural sites in such a way that they can be completely visited again virtually in the future and even rebuilt if necessary. A wonderful idea with an impressive live visualization, conceived by an 18-year-old!

Michael John Gorman presented beautiful insights to a project in Munich in the Schlosspark Nymphenburg. There a completely new museum for life sciences and environmental development will be built until 2025 under the name BIOTOPIA (www.biotopia.net). With 3D visualizations and augmented reality, visitors may even be able to experience nature in such a way that they experience the world of a frog, elephant or mouse from the perspective of animals and feel and understand interactions with humans from the inside of animals.

Carin Ism finally presented a project in which the future order of Mars will be created. She had spent the month of September 2019 in the Himalayas at an altitude of 14,000 feet in an isolated, cramped and extreme environment with a crew to develop the design principles for space societies. The future Mars order could become the blueprint for better societies on Earth. So maybe instead of intelligent life on Mars, we will find intelligences for the life on Mars. Mars would certainly be an interesting location for a future Tedx.

„You cannot be as productive in 4 days finding solutions for your clients, as you are in 5 days. But we have to look for more important models to support family life.“, Hanno Renner, CEO @PersonioHR @HannoRenner #bits22 @bitsandpretzels #NewWork pic.twitter.com/pJK3…

NewWork-Panel #bits22: Kathrin Anselm, @airbnb_de : „Our employees can work from where ever they like to! One of our core values is ‚belonging and being a host‘. This also applies on Zoom.“ @bitsandpretzels #airbnb pic.twitter.com/DG5A…